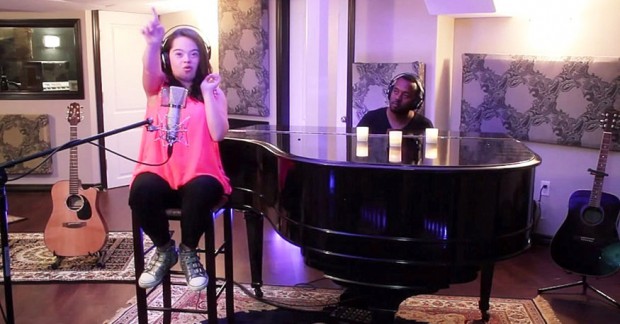 For many years, medical professionals have deduced that few individuals with Down syndrome will ever develop the ability to sing. This is for a number of reasons, not least of which is the common inability for these individuals to use their vocal chords correctly, or in the intricate fashion which creates pitch variation and the ability to discipline tone. But just as Walt Disney astonished those who told him he ‘lacked the imagination and creativity to be a success’, there exist a handful of remarkable people with Down syndrome who simply refuse to be characterised by a set of statistics.

Earlier this week, a video radiating immeasurable loveliness domineered the internet for all the right reasons. A girl whose dreams and ambitions far outweigh any scientific odds, 12-year-old Madison Tevlin placed herself in the hands of a precarious global audience to do what she loves and to defy the odds that were once stacked against her. Despite battling a sinus infection at the time of the recording, she progressed to deliver a tear-jerkingly passionate performance.

Her performance didn’t reduce me to tears simply because a girl who happened to have the same condition as my sister was all over the internet doing something wonderful. It moved me to tears because, as I watched her give her all as she belted out notes which allegedly exist out of her range of capability, it dawned on me that so many of us could – and should – take a leaf out of Madison’s book. At just 12 years old she has accomplished something that few of us are brave enough to accomplish in a lifetime. Madison stepped out in front of that camera and told the world who she was, told us of her hopes and dreams before proceeding to show us exactly how she intended to live them.

Watching Madison lose herself to the lyrics of a song that bears such sentimental value to her struck a chord with me. Each and every day, I sit in my living room and watch my 13-year-old sister do the very same thing, her ambition to become a star unblemished. Both my sister and Madison exist as two exemplary individuals whom we should revere. They are shining examples of why no individual should ever be defined by a condition, and further, why the ignorance towards Down syndrome needs to disappear forever. Maybe we don’t all have Down syndrome, but we do all have characteristics that set us aside from the next person. Does that make us retarded? Does that make us any less able or less precious than our peers? Of course it doesn’t, and neither does Down syndrome. Individuals with the condition should be treated with the respect, dignity, humanity and love that we all deserve. If my beautiful, admirable sister isn’t the prime example of that, then I truly hope that Madison Tevlin will be.